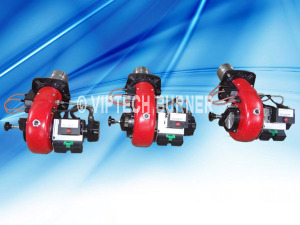 A burner is a mechanical device that.

In oil burners, oil is atomized into a fine spray by a spray nozzle and air is supplied for combustion in the spray chamber. Alternatively oil may be atomized by high speed air to produce a fine dispersion of droplets into air.

There are liquid fuel and gaseous fuel burners. In liquid fuel burner, oil is heated and atomised either mechanically or by high speed gaseous jet.In mechanical methods oil is atomised by means of a rotating disc or cup or by swirler

A gaseous fuel burner could either be of premixed type or diffusion type. In a pre-mixed type gas and air are mixed prior to passing through the nozzle. In diffusion type fuel and some amount of air is mixed and the mixture is passed through the burner. Rest air for combustion is supplied in the furnace chamber. Combustion of fuel is controlled by the rate of mixing of air and fuel. In these burners small portion of air is mixed with fuel as primary air and the rest amount, known as secondary air is supplied in the furnace.

2). How mixing of air and gaseous fuel process is done?

In diffusion burner air and gaseous fuel are supplied separately in the furnace. In modt combustion systems mass of air is at least 8 to9 times than fuel. When air and fuel pass through the burner, the momentum flux of air is several times greater than fuel. Some fraction of total air is mixed with the fuel and this air is known as primary air. Rest amount of air, known as secondary air is supplied in the furnace through appropriate locations. Mixing and combustion take place simultaneously.

When a mixture of air and gaseous fuel passes through the burner, a free jet is produced downstream the burner. If the air fuel mixture is discharged in the furnace then a confined jet is produced because of the furnace walls. The difference between the free jet and confined jet is that in the former the amount of surrounding is unlimited whereas in the later the amount is limited. Mixing of secondary air in the jet is important for complete and efficient combustion. In the absence of mixing the chances of formation can not be ruled out.

3). What are the caracteristic features of jet (Fired Flame)?

Momentum flux = Mass of the jet X velocity of jet

4). What is the behavior of free (unconfined) and confined jet ?

A free jet has no confinement and hence can spread till the difference between the momentum flux of the jet and the surrounding becomes zero.

In furnaces jet is confined by furnace walls. Due to confinement, mass of the surrounding is limited to the amount equal to secondary air. The primary air mixes rapidly with the fuel at the nozzle but the remaining air must be entrained and for this purpose excess momentum flux in the jet is required. If the confined jet has momentum flux in excess of that required for the complete entrainment of the secondary air, products of combustion will entrain and a circulatory jet is produced.

5). What is the role of primary air in the burner process ?

In the design of burner for gaseous fuel it is important to design the primary air depending on the requirement. Since the amount of air is many times greater than the fuel, momentum flux within the jet is controlled by the primary air. The primary air

6). What is degree of Â re circulation?

Recirculation sets in when the secondary air is mixed completely with the fuel. Degree of recirculation indicates complete mixing of fuel with air.

In confined gets, absence of recirculation results in a tendency for the flame to expand until it impinges into the furnace walls of load. Hot gases will be in direct contact with the refractory brick which may result in failure. The recirculating gases provide a âcushionâ of cooler inert flue gases which prevents direct impingement of flame. A high momentum recirculartory jet will also produce a stable flame which is comfortable.